Wild wolves, bears and lynx are sharing landscapes with humans in many parts of Europe, a new study in Science finds

A new study published in Science today finds that large carnivores such as wolves, brown bears, Eurasian lynx and wolverines have made a comeback in one-third of mainland Europe’s surface area. This development is widely hailed as a major conservation success. Data and knowledge gained in our SloWolf project are also included in the study.

The article, written by 76 large carnivore experts from 26 countries, summarized the status of these four large carnivore species across the European continent and the results are remarkably positive. Coordinated by the IUCN’s Large Carnivore Initiative for Europe (LCIE), the study finds that in one-third of mainland Europe at least one species of large carnivore is present. This is an excellent example of how humans and carnivores can share the same landscape.

The study finds that there are currently 17,000 bears, 12,000 wolves, 9,000 lynx and around 1,250 wolverines. Remarkably, all of the recovered species in Europe occur in areas with high human densities, in landscapes that are highly modified, intensively exploited and fragmented by infrastructure. This is in stark contrast to many other parts of the world, where large carnivores are restricted to national parks and wilderness areas. 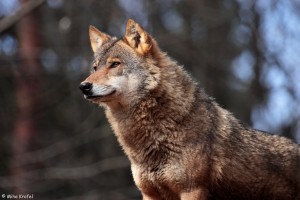 “The recovery of large carnivores in Europe is a success story that builds on good legislation, political stability, strong institutions and a favorable public opinion,” said Guillaume Chapron, lead author of the study and member of the LCIE. “This is an example of species that have benefited from EU legislation, and it shows that the EU Habitats Directive works.”

Most large carnivore populations are now in the process of recovering after a long period of decline in Europe, during which they were heavily persecuted and suffered from the loss of forest habitats and wild ungulate prey.  By the early 20th century, large carnivores had been exterminated from most of Europe.

Many factors have contributed to their spectacular recovery. The 1992 EU Habitats Directive provided the basis for favourable legislation at regional, national and European levels protecting these species, and this was preceded by an increase in available prey species and a recovery of Europe’s forests that provide habitat. In addition, strong institutions have been developed to promote sustainable forest, wildlife and nature management.

The case of large carnivores is a powerful demonstration for the potential of a land-sharing strategy where biodiversity conservation occurs in the same landscapes that people use for living, working and recreation. This success story is encouraging, allowing for ambitious yet achievable conservation goals.

“This European conservation success story has an important message for the rest of the world – that you can sustain substantial wildlife populations even in heavily modified landscapes given the necessary preconditions,” said John Linnell, also a member of IUCN’s Large Carnivore Initiative. “Clearly we need to preserve the remaining areas of wilderness on this planet, but our results show the enormous wildlife potential that multi-use landscapes retain.”

The return of large carnivores has not occurred without conflict, however. Many of the original reasons for human antagonism towards large carnivore species, such as their depredation on livestock, are resuming and species like the wolf have become a powerful symbol for wider tensions between rural and urban areas. Failure to address these conflicts could endanger the continuation of this conservation achievement.

In June 2014, the European Commission launched the EU Platform on Coexistence between People and Large Carnivores to facilitate constructive dialogue among key stakeholders including farmers, conservationists, landowners and hunters, and to find commonly agreed solutions to conflicts arising from people living and working in close proximity to these large animals. IUCN is one of the stakeholders represented on the Platform.

Finally, it is important to bear in mind that there are some small populations of bears and Eurasian lynx that remain critically small and highly endangered in Europe. Reversing the trend for these small populations, and fostering the further recovery of the larger ones will require extensive dialogue with a diversity of stakeholders, coordination between many different sectors such as environment, agriculture, forestry, transport and energy, and transboundary cooperation between all European states.

IUCN is the world’s oldest and largest global environmental network – a democratic membership union with more than 1,200 government and NGO member organizations, and almost 11,000 volunteer scientists in more than 160 countries.

IUCN’s work focuses on valuing and conserving nature, ensuring effective and equitable governance of its use, and deploying nature-based solutions to global challenges in climate, food and development. IUCN supports scientific research, manages field projects all over the world, and brings governments, NGOs, the UN and companies together to develop policy, laws and best practice.

The IUCN EU Representative Office in Brussels provides global services to the organization and vital linkages for IUCN (and its Members, National Committees, scientific Commissions and the global Secretariat) to key EU institutions and other public and private actors.
www.iucn.org/european_union

About the Large Carnivore Initiative for Europe (LCIE)

The Large Carnivore Initiative for Europe is a Specialist Group within the Species Survival Commission (SSC) of the International Union for the Conservation of Nature (IUCN). LCIE consists of a group of experts working on conservation of large carnivores in Europe.

The members bring experience from the fields of ecological and social science research, wildlife management, hands-on conservation, and from international conservation organisations.

In 2013, the LCIE published Manifesto for Large Carnivore Conservation in Europe, and provided a series of reports to the European Commission, including reviews of the status and management of large carnivores in Europe, as well as a report on conflicts and conflict resolution methods. In January 2013, LCIE members have assisted the European Commission in organizing a stakeholder workshop in Brussels on these issues.